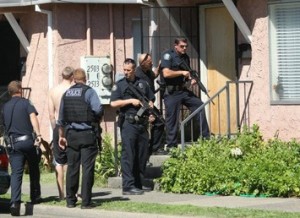 An assault lawyer Provo, UT trusts from Pacific Legal Group knows that when someone accuses you of assault, it can be detrimental to your defense to try and attempt your case alone. Especially when someone is innocent, they may believe that proving their innocence will be simple. However, we encourage you not to take on these accusations alone. You may have the right alibi but do not know how to present it to the court. You may also be wholly unprepared for the charges against you and the evidence that the other party has gathered. If someone has accused you of assaulting them, do not try to do this on your own. Instead, work with a team that has practiced assault law for years. Call Pacific Legal Group now.

Are there different types of assault?

Utah laws have identified a few different types of assault, including classes A and B misdemeanor assaults and 2nd and 3rd-degree felonies.

If you are facing assault charges and need to speak with an attorney, do not hesitate to contact our Provo, Utah assault lawyer for more information.

Can I argue that I was using self-defense?

Many people use self-defense as an argument when they are being charged with assault, whether they were defending themselves, another person, or their property. A judge will look at a variety of factors when it comes to claiming self-defense, including how serious the threat was, whether you or the other party have a history of violence or aggression and whether the threat was immediate. We understand that while it may seem like self-defense is a simple argument, a judge may still look at the evidence laid out and disagree. This is why you want to ensure you speak openly and honestly with your attorney, present the facts, and have them argue on your behalf.

One way that might give you better odds of having the charges reduced or dropped, is by meeting with an assault lawyer Provo, UT residents trust who is experienced in handling criminal defense cases. Aggravated assault and assault are serious charges that can cause someone to serve time in jail if convicted. We understand what you are up against. A simple assault, or otherwise called battery, for the state of Utah is considered a misdemeanor. A person charged with a class B misdemeanor may be punished by serving up to 180 days behind bars.

This charge can be raised to a class A misdemeanor if the assault act caused significant bodily harm to another person (or if the person was pregnant and the suspect knew they were pregnant). By Utah law, assault is defined as an unlawful force or attempt or violence, to inflict bodily harm to another. A person may do so through a threat, in addition to an immediate show of violence or force to inflict bodily harm on someone else. Substantial bodily injury is considered an injury that causes or creates protracted physical pain, temporary loss or impairment, or temporary disfigurement.

If the assault entailed the threatened or actual use of a weapon or involves serious bodily harm, then it may be filed as an aggravated assault on a felony level. As a Provo assault lawyer can explain, the repercussions for aggravated assault in Utah are much higher and can result in prolonged prison time. You may be found by the court to be guilty of assault, even if you engaged in acts that are alleged. Utah criminal law states that the use of force may be justified but only in some circumstances, including defense of the home, self-defense, or defense of property. But as your lawyer can review with you, the self-defense laws for Utah are not always straightforward. The defense of self statute allows someone to use reasonable force to protect themselves when faced with the threat of harm by another.

If you need a Provo lawyer assault team who understands the nuances of Utah law and how to use them for the benefit of a client, then we are the legal team to rely on. We can consult with you about the allegations, let you know what realistic defenses could work in your favor, and can represent you in court if needed. We are here to offer legal services that are unmatched and can imagine the stress you are currently under. We can guide you and ensure that you receive fair process by law and can develop a strategy to hopefully reduce your charges. At the very least, we can offer a consultation and you can decide from there how to proceed. If you choose to hire our legal team at Pacific Legal Group, then we can get to work for your defense right away.

If you are facing charges for a criminal charge, such as an assault, then you must have a knowledgeable team on your side. We can protect your rights and help you during a time when it seems like the odds are stacked against you.

Are you interested in speaking with an attorney about assault accusations? Please contact our assault lawyer in Provo, Utah, call Pacific Legal Group today.