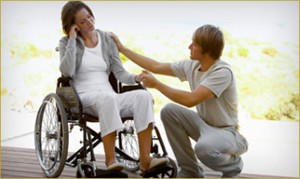 What are the consequences of being charged with domestic violence?

Our Provo, Utah domestic violence lawyer knows that this kind of crime can carry serious consequences if you are convicted. A criminal conviction could mean that your career is impacted because your criminal record is public.  This could mean that you are unable to get a job as a teacher or in health care. This could also damage your ability to have custody or visitation rights of your children if you are convicted of domestic violence. Further, if you have been found guilty of domestic violence, you lose your right to bear arms. Thus, if you work in a position that requires you to carry and use a firearm, you can expect to need to look for another job.

When charges for a domestic violence accusation are brought against you, your domestic violence lawyer Provo, UT clients trust can assess the police report for the incident and then create a defense. By analyzing the police report, we can find the answers to our questions that we need. For instance, we may need to know what you told the police about the incident, if there were 911 recordings that challenge or support your claims, how recent and severe the victim’s injuries are, your emotional state during the incident and after, whether there are past incidents of violence against you, if anyone involved was intoxicated, and more.

Based on our findings, we can let you know whether the charges against you may be minor or major, and we can also learn whether you have said anything that is inconsistent with your defense or incriminate you. Ideally, you’ll have not answered questions from law enforcement during interrogation about what happened. But a Provo domestic violence lawyer knows that many people forget to remain silent until a lawyer is present. It’s easy to get overwhelmed in the moment and try to say things that will help show you are innocent or that the incident was not exactly how the supposed victim is portraying it to be. However, law enforcement is often viewing the incident from the victim’s perspective and may assume guilt of the accused unfairly.

There are a few main defenses that could work in your domestic violence defense case. You may claim that you simply did not do it and that the victim did not suffer abuse from your hands, but was inflicted by another person. If this is the case, your lawyer can seek to establish your alibi to show that you were not at the scene or even near the area when the crime happened. If there is incriminating evidence that cannot be disproven, such as your voice on the 911 call or neighbors who saw you, then another defense may be more suitable.

If you committed the claims against you but law enforcement made mistakes during the investigation, then your Provo lawyer domestic violence team can take certain steps to show that police engaged in misconduct and that your charges should be dropped. Your lawyer may show that the police interrogated you while in custody but failed to record it, the police failed to read you your Miranda Rights, you were denied a request for an attorney, police questioned you after you invoked your right to stay silent, there was no probable reason to conduct an interrogated or search, the factors of the incident were not serious enough to warrant a search without a warrant, and more. Your attorney from Pacific Legal Group may uncover that law enforcement did not ask you to give your account of what happened prior to arresting you, as in many cases, police operate with a bias that the supposed victim is telling the truth, which is an injustice to the accused. Law enforcement may have not sufficiently described what happened in their police report, did not question eyewitnesses who were at the scene, or failed to collect physical evidence to use against you.

These charges are serious and you should not leave it up to chance when you are being accused of domestic violence. Without getting proper representation, an ex-spouse could bring up these charges to get child custody or it could make any future criminal charges or convictions automatically worse. Even if you allege that you had a good reason or that it was self-defense, having an attorney defend you will yield a better outcome than fighting these charges on your own. To get help from a domestic violence lawyer in Provo, Utah, call Pacific Legal Group now.